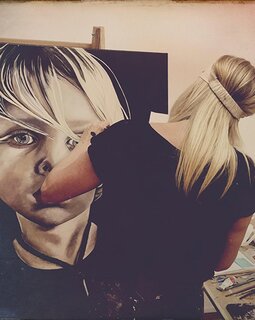 Auckland-based artist Sharon Duymel specialises in portrait and figurative paintings.  Initially self-taught, Sharon has since undertaken years of art training both privately and at the Browne School of Art.   Her professional development as an artist has been further extended by being privately mentored by Matthew Browne, Zarahn Southon ( Studio Escalier in France)  and Nici Peacock ( New York Academy of Art). She exhibits her portraits in oils in galleries around New Zealand and is regularly approached with requests for private portrait commissions.  Sharon was born in Utrecht, the Netherlands and moved to New Zealand as a young child.  Her  husband is of Maori descent, as is her youngest son.
​She is passionate about expressing her love for New Zealand, its people and its culture, through her art.  More recently she has researched NZ historical characters and has relished in bringing them back to life...

"Ngā Rangatira, The Noble Leaders, is my most recent series that I am still working through. As a result of the impact of the Mosque Shootings in Christchurch in March of last year, I found myself capturing our Prime Minister in response to this abhorrent event. New Zealand’s first terrorist attack was felt by the whole world.
In my representation of our Prime Minister, I adopted a theme of realism, attempting to capture the love in her eyes for the victims and their families. I called it TE AROHA MO TE IWI, The Love for the People. I felt it was very fitting, as Te Aroha was the middle name she gave her young daughter and also was the name of the town she grew up in. Our Prime Ministers’ response to the event was recognized globally for being incredibly heartfelt and humanitarian.
This piece sparked my interest to research other leaders of New Zealand whose actions were significant in shaping our culture, especially historically. I have a very keen fascination with the Māori people of New Zealand. Not only because I find their culture to have great substance, but also because I have a direct connection to the Tainui tribe. My husband’s great, great, Grandmother was a lady named Moera Jane Phillips (1846-1921 Waikato Tainui). His family still have a Marae in Raglan, where we have taken our son to stay for family gatherings. We felt a strong connection to this history and their heritage when visiting their cemetery where all of his ancestors lay buried. I have been privy to many stories told there of the troubled history of the Waikato and the Māori Land Wars. This association led me to discover my next subjects in my series. A Māori Chieftain,Rangatira, a strong, handsome warrior whom fought for people of the Waikato, and a Māori minister, He Minita, a dignitary in spirituality, also from the Waikato. These particular pieces have had an incredibly positive response from the greater Māori audience through social media.
I chose my next subject, Ralph Hotere, one of New Zealand’s most notable artists of Māori descent. I obtained permission to paint his portrait from his wider family, which I felt was crucial to the success of this piece.
I am currently working on a piece of Sir Edmund Hillary. Obviously a very significant New Zealander whom shaped our history as well. I have a direct association with his son, given I am a life member at the Tongariro Ski Club, where Sir Ed used to stay and also train for his expeditions. His son Peter has given me permission to paint his portrait and is supporting me in doing so. I am reading his Biography written by Michael Gill, which is a real eye opener to his incredible story. "

SOLD He Minita - a Minister