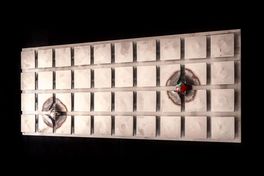 ​Paolo Massei’s sculpture can express itself to the fullest in both large and small scale works. This series of works shows exactly how, on a reduced scale, the same iconographic conditions realised in the monumental works are maintained, but with a focus on aspects of detail rather than constructive energy. The work takes form in two different ways: on one hand, the series of works inspired by the human form, characterised by a playful and ironic language; on the other, such distinguished by a rigorous minimalist style and the symbolic blend of pure geometric forms.

In the first case, the sculptors imagination is let loose in a game of anthropomorphic elements, exhibiting a disillusioned narrative in which at play is the idea of a hard material such as iron transformed by his blacksmithing skills into a kind of soft dough with which to give life to beings outside of time and space.

A humanity free of every constriction living exclusively in the absolute space of the work of art, eluding the limits imposed by the cold material they’re composed of to penetrate the mental infinity of a vitality suggestive of absolute freedom. There is the allusion to the archaic origins of man, given form in the tribal figures in which the essentiality of the symbol takes us back to the simplicity of the primitive beings relationship with nature.

In the case of the abstract sculptures, Massei focuses instead on the theme of the module and the pure geometric element. His minimalism is realised in a series of expressive references constantly pointing to the internal sense of form and space, intended as an absolute relationship between the sculpture and the surrounding environment. The works are conveyed through a sense of balance between the masses and the focus on geometric elements that take turns in a constant dialogue, with a rhythm that in some cases takes on musical meaning. A rhythm of form and substance is also brought out through the rotation of different material elements according to a constant alternation of forms and colours that offer a vitality to the works that would otherwise be difficult to realise. The sculptural structures rise up like ancestral elements almost challenging the rules of gravity, as in, for example, the case in which a golden sphere sits in mid-air between two pillars that are placed behind it.

Overall, we are witnessing the realisation of totemic elements with some important historical references, such as to Brancusi’s Endless Column, and it is precisely in the wake of the great Romanian sculptor that Massei designs his sculpture conceived in direct relationship with the mystery of the cosmos and the elements that govern matter.
​
From the allegorical point of view, his works are a song addressed to nature in the constant search for a possible relationship between the human element and the surrounding world, projecting the very essence of art in the mythical Golden Age.