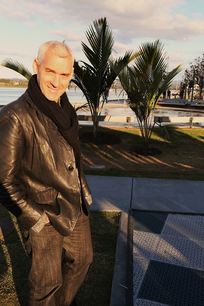 “Although not a practising Buddhist, I am influenced by Buddhist art and its philosophy. With this approach I set out to create a meditative quality to my works, and hope the viewer can access their own inner world, which transcends culture and belief.

I believe there is no separation between human nature and the natural world, they are a perfect reflection. Drawing on metaphysical influences particularly that of quantum entanglement, I have explored these in a more personal way through my work, seeking the connections of the physical world and the spiritual.”

Working with the materials of the old masters, Oils and gold leaf on gesso wooden panelling gives the work an ancient feeling within a contemporary setting.

Sometimes the subject content is mercurial to define, this pleases the artist as it the response to the work that is of importance, arriving at an explanation means art can become stationary, final, much rather the ambiguity and thus movement in various directions, the mapping of which is controlled by the viewer.

SOLD - Mythology of the immigrant