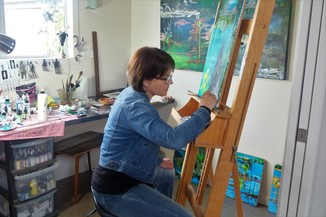 Lea-Anne Sheather acquired her Master’s degree with First Class Honours from Whitecliffe School of Fine Arts. She was the winner of The Miles Art Award in 2014 and her work is held in significant collections including Chris Parkin and Sir James Wallace Arts Trust.

Lea-Anne Sheather’s work is driven by what the philosopher Lev Shestov described as a “God-craziness... which requires a turn towards Earth…to love the world in its flux and immutability and to be crazy in love with the world of life, to engage ourselves in its power, resilience, connectivity and ambiguity”.

Sheather seeks to reflect the wonder and allure of nature through the shamanic-like creatures that she has been working on and developing over a few years and the imaginary place they were created in which she calls 'The Island of Woo’. She describes the creatures as being like little spirits that The Island of Woo has given birth to. The Island of Woo is also under its own construction too. It evolves, breathes, and transforms as much as the shamanic creatures it has made.

Sheather describes the Island of Woo as being like a ruin. It is similar in that a ruin reminds us of the temporary nature of our existence. The inherent beauty within nature slowly erases the wound that is the ruin and demonstrate that time is unstoppable. For 4 billion years life has been continuous on Earth. Humans materialised in a dynamic relationship with all other life forms. We shared water, air, and energy. However, we are now in the precarious position where we are unmaking the world of life that has been in the making for so long.

We're all Stardust and Plastic

Shuddering Folds of Intelligence that we Inhabit

Island of Woo's Ongoingness despite the Trouble